OH GOD. Where do I even start with date 6. My only clues from Vig on this one were that he’s rich and a soccer player. We didn’t talk at alllll before the date, he texted me last minute on a Friday and asked if I had plans for the night and if I wanted to go to the Lakers game with him. I didn’t have anything else to do so I figured I’d give it a shot. Plus they were playing the Raptors and I know Drake likes that team so I was hoping he’d be there.

I haven’t been using names but when it comes to date 6 I just DGAF bc it’s JRAKE. No, that’s not a typo for Jake, that is DRAKE WITH A J. Half of me was just confused and half of me was excited that this would become my own personal Drake. first thing I noticed was his accent. He was a little hard to understand, it sounded like a Jamaican or something like that…I still don’t think I can put my finger on it. Right away he started flashing his money and throwing cash around. Literally. When he emptied his pockets for security he threw a handful of $100 bills on the conveyer belt to go through the metal detector. He was tall and black and an athlete and our seats were pretty close…on paper it was all a perfect match.

I don’t even know where to start on the reality of it. We were making normal conversation (kind of, he was def dropping some hints that he was a little bit of a fuck boy) and then all of a sudden he said:

Jrake: so do you get starstruck?
Me: (oh god I fucking hate when people name drop) no not really haha why
Jrake: one time like two years ago I saw Trey Songz in an elevator at a hotel and my buddy was all star struck but I played it cool. I told him “yooo man, your music gets me laid all the time, I love fucking to that shit”
Me: (silence waiting for the rest of the story)
Jrake: haha yeah it was funny

I think that was the moment when I texted Vig, who was across the stadium, and told her “shit I think he has a lot of money but idk if I can do it, he’s a fucking douchebag”. She convinced me to stay for her own entertainment as always. We met Vig at Yardhouse after the game for a couple drinks. It was normal-ish, he was still throwing cash and buying all my drinks and buying tequila for the whole bar so I wasn’t complaining. The guy next to him started talking to him and Jrake leaned over to me and told me in confidence “he’s a fan…this happens a lot, I’m in the FIFA video game so people recognize me”.

I could tell that Jrake was into me from the way he was acting…normal things for a first date like telling his fans that I was his girlfriend, inviting me on weekend getaways, reassuring me that I’m his baby, stuff like that. When he went to the bathroom he left his wallet with me and said “here hold this, you’re my baby girl now so what’s mine is yours”.

Somehow between the tequila and the glimmer of hope that I could have a new sugar daddy I decided to stay at the bar with him after my friends had left. WHAT WAS I THINKING. Actually I know exactly what I was thinking….”wow this guy just said that his mom gets mad at him for spoiling his girlfriends too much too soon, maybe I can get a fucking car out of this. or at least some jewelry. You can do it Alex”.

He had plans to go out with his friends after our date so I figured I had an easy out anyways. After another drink, we were on our way, he was going to take me home on the way to meet up with his friends. We went to a parking lot and instead of getting his own car, he took the car of the guy who was working at the parking lot. still a little confused about the details of that, he said something about how his dad owned the lot and he didn’t want to take his nice car since he’d been drinking. In the car he offered to ditch the club and hang out with me because “he doesn’t want to put me in the situation of having to watch other girls hit on him all night”. UMM okay I wasn’t even coming in the first place, but hey thanks for thinking of me. I assured him that I was tired and 100000% okay with us parting ways. He asked to come up and use my bathroom when he dropped me off. I said yes like an idiot. And then he just DIDN’T LEAVE.

This part is actually super uncomfortable for me to write about because it makes me feel gross to even acknowledge. We didn’t have sex or anything but it was not for his lack of trying. I told him I wasn’t going to sleep with him from the beginning and he did not stop trying. Thinking about the vulgar things he whispered in my ear all night long makes me want to vomit. Looking back the amount of effort he put into it after I told him no is appalling. The obvious answer would have been to kick him out, but I felt too uncomfortable to tell him that he needed to leave, which is ridiculous, it was my fucking house.

He texted me the day after and said “hey love, hope you’re having a good day, let me know if you want to hang out tonight.” I politely declined and over the next couple days he kept it up with a string of awkward/overwhelming/weird texts. After a couple weeks of me avoiding him, he asked if he could come pick up his watch (oh yeah he left his watch that was supposedly 30k at our house – we STRONGLY considered bringing it to a pawn shop but didn’t follow through). I think he FINALLY got the hint that I wasn’t into him when I responded that I’d just messenger it to him instead of actually having to see him in person for 5 minutes.

Lesson #6 – I can’t date someone for their money, I’m just going to have to find a sugar daddy that I can actually stand to be around I guess. Oh well. 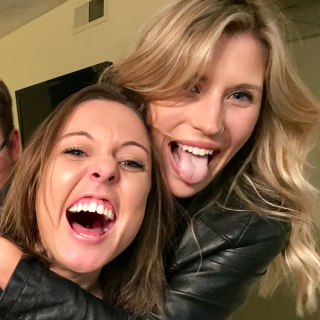